Celebrate Shakespeare's Birthday (on any day)!

William Shakespeare was born on April 23, 1564, and he died on the same day in 1616. We think that if Shakespeare were here to celebrate his 449th birthday, he would absolutely love the party we cooked up in his honor.

Our Shakespeare's Birthday Party set features a colorful poster and 32 task cards featuring fun trivia and lines from Shakespeare's plays. It also includes a "modernize Shakespeare" activity, where students update a line drawing of Shakespeare by cutting, gluing, drawing, and otherwise transforming to bring his image into the 21st century. (Middle school students have a ton of fun equipping Shakespeare with Kindles, iPods, and Kanye glasses.) The party is a great way to kick off a Shakespeare unit or to introduce him to apprehensive students! 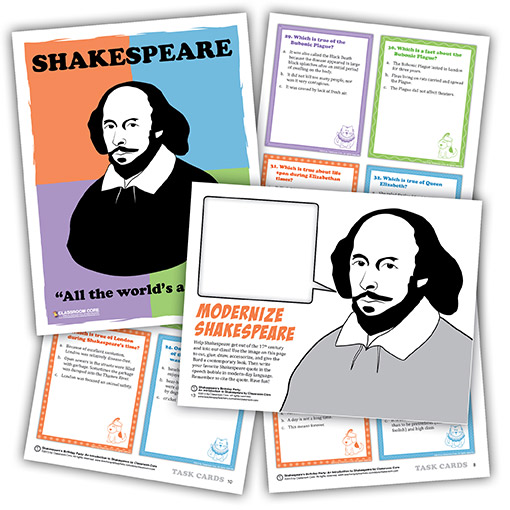 The set also includes 12 printable cupcake wrapper templates (both in color and in black-and-white). The wraps feature our own original artwork of a coy little Shakespearean cat and dog donning their Elizabethan best, and quotes from Shakespeare plays. Some of the quotes we included are these:

"If music be the food of love, play on." (Twelfth Night)
"Prepare for mirth, for mirth becomes a feast." (Pericles, Prince of Tyre)
"Honey, and milk, and sugar; there is three." (Love's Labours Lost)

Look at how adorable the cupcakes turned out! The wraps in the picture below were printed in black-and-white on colored paper. 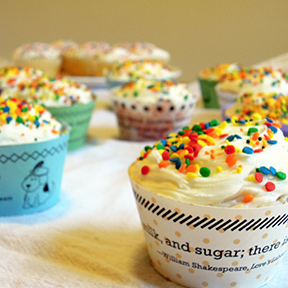 And these were printed in color. If you happen to own a fancy pair of scissors (like the ones that can cut in zigzags or waves), they would probably add an excellent touch. 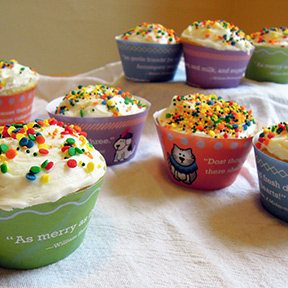 Yum! Educational and delicious! Olive the cat was quite fond of them too. 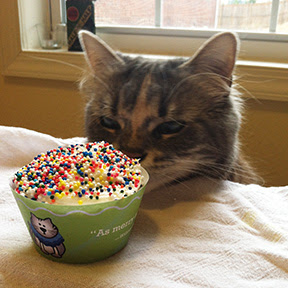 You can download four of the cupcake templates for free here!
Posted by Classroom Core

Classroom Core
Hello! We are a teacher and designer who have teamed up to create original lesson plans and activities for the classroom! We have more than 17 years of experience teaching English to middle school and elementary school students, as well as advanced degrees in English and Education. Experience has taught us that students learn best when they are actively engaged in a topic. That's why our products include hands-on activities, such as colorful task cards, games, and fun lesson plans. We create products with effectiveness and ease of instruction in mind, and we format and design them using our own original art and layouts. We hope you find our ideas useful for your classroom. Thanks for stopping by!